skip to main | skip to sidebar

Isaac wanted a video game party for his birthday back in November (yes, I know I am several months late). I was not feeling inspired, so went with a specific video game, Angry Birds! 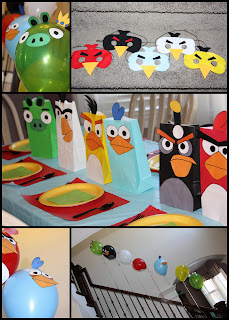 Isaac decided to invite all the boys from his class, this is the most kids we have ever had at a party and it was crazy! I made bird masks for all the kids. And bird goody bags. The kids had pizza and rootbeer for dinner. Then we played games. ﻿ 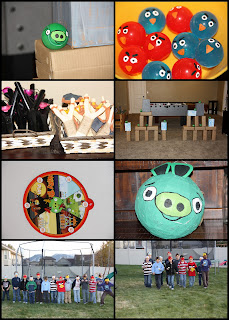 The first game was darts (sorry the picture is sideways). Simple. Then we went outside and did an egg race. They ran with the egg on a wooden spoon to the other end of the yard and had to place the egg in the nest without it breaking. Then we headed to the basement to play Angry birds. All the structure pieces were boxes (most of which were Capri Suns turned inside out). I painted pig faces on some green foam balls. And bird faces on red and blue bouncy balls, which the kids sling shot at the structures and had to knock all the pigs down. After that we had a pig pinata.﻿ 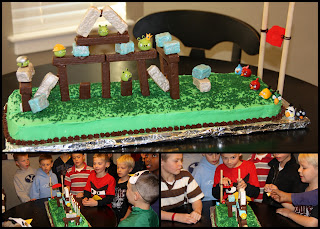 The cake. This was fun to make. I had seen several similar ideas. I wanted it to be a cake they could actually play. I had a wood board which I (or the hubby) drilled holes into to hold the dowls that made the sling shot (felt and rubber bands). The cake itself is 2 9*13 pans. I used Reeses Peanut Butter Sticks for most of the structure and the rest were rice Krispy Treats dipped in white or blue chocolate with a silver dusting on it. The birds themselves were not edible, they were purchased on Amazon.
All in all a fun party, just way to many kids. Hopefully I never make that mistake again. It seemed like all the kids had a great time.﻿
Posted by Jacobson Five at 2:39 PM 3 comments:

Bring in the Clowns

We turned the basement into the carnival We had popcorn and cotton candy, every kid got tickets and a goody box to put their prizes in.﻿ 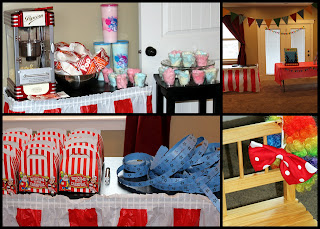 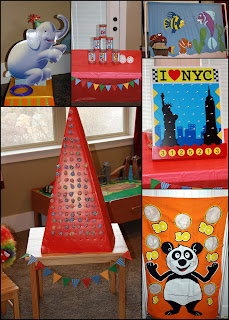 After the games were played we headed upstairs for cupcakes and ice cream. I went with the clown cupcakes instead of a cake because they were so darn cute and colorful. ﻿ 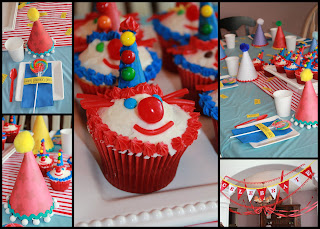 The pictures are a bit out of order, but when the kids arrived they all got a homemade party/clown hat. While we waited for all the guests to arrive I made balloon animals. Who knew I had that talent.﻿ 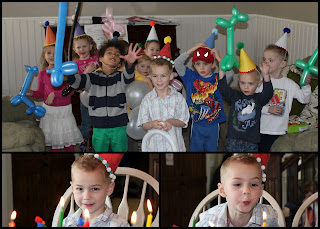 It has been a long time since I've done any blogging, but I think I might give it a go again. We'll see how long this lasts...Sydney had her birthday almost a month ago. It has been a fantastic 3 years. She really keeps us on our tows. It is fun to have a little girl around the house. 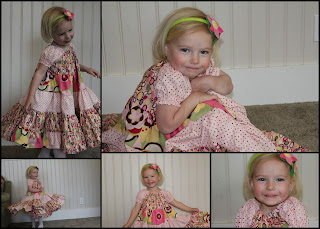 In honor of her birthday I sewed her a dress. It had been almost a year since the last dress, so I thought she was due for a new one. Over a year ago I bought a pattern book that had this twirly dress in it, I'd wanted to make it and I'm glad I did, she just loves spinning around in it.

Sydney does not have a lot of friends. ALL of the kids her age in the neighborhood are boys. So at first I thought I would just take her and a friend to Build-A-Bear, but I just couldn't do it. But I did use it to inspire a theme. Goldilocks and the Three Bears. 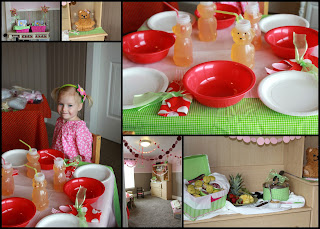 I was able to find a few ideas out there (thanks to Pinterest). I got some ideas from this party and this party. I loved the Honey Bears for cups, the red, pink and green color scheme, and the find Goldilocks game. I still liked the idea of the Build-A-Bear so I found some kits on Amazon (they were buy 3 get 1 free) and used that for an activity. We had porridge, muffins and fruit for brunch. And I used the 3-D Wilton Teddy Bear Cake pan to make her cake. 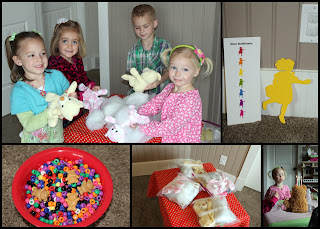 We made the bears, teddy bear necklaces, played Find Goldilocks (I used my Sillhoutte machine to cut out goldilocks in the 7 different colors and taped them throughout the house, when they found the colored Goldilocks they would circle it.), and I read them the story of Goldilocks and the 3 Bears. Sydney loved her little party and one of her little friends went home and told her mom, "I had the most amazing time at Sydney's party."
Well in my bad blogging days I have missed several other birthday parties and so for the next few post I may just post some Carnival and Angry Birds fun.﻿
Posted by Jacobson Five at 1:37 PM 3 comments:

And I Thought it Could Never Be Done!

Back in December I made the decsion that I was going to run a half marathon. Keep in mind the longest distance I had previously run was a 5K. I bought a treadmill (used) and started my preparations. I would run 3 days a week, one of those days would be a longer run. My long runs started at 3 miles and I worked my way up to 10 1/2 miles. When the weather got nicer I started running outdoors (and vowed I would never set foot on the dreadful treadmill again.) A few weeks ago I started having some major pain around my right hip(ish). So a few weeks before the race I thought it best to take it easy. At first that meant still working out but not running. Then when I still wasn't feeling better...lets just say I didn't do any form of exercise the whole week before.
Yesterday (the day before the run) I had one of those days, where I kept saying to myself, "WHAT WERE YOU THINKING!" I was so emotional. I would start tearing up everytime I even thought about it.
The day of the race: I woke up at 3:00 am to ready myself for a 3:30 am departure. My friend Kelli and her hubby picked me up. We drove to the mall, parked the car and hopped on a bus that took us to the starting line. (I am so thankful to my friend Kelli, not only did she encourage me to run the race in the first place, but she distracted me the whole morning with great conversation so I wouldn't be focused on the torture that awaited me.)
﻿ 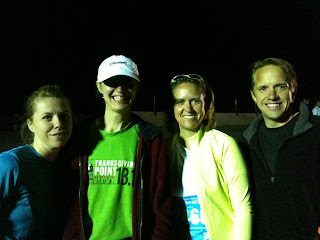 Me, Lesli, Kelli, and Shilo﻿
We got to the starting line at 4:40...the race didn't start till 6:00. So we stood around a campfire trying to stay warm. We ran into some other folks from the ward to help keep us company. And then at 6:00 we were off. The start of the race was great, other then the pain in my hip, I was feeling great. I made it to the halfway point in 1 hour and 4 minutes. (Which is excellent time for me.) But then it got harder to keep running. At the 8 miles point I grabbed some gatorade at a refresment station and it made me so thirsty, those next 2 miles were horrible. I just wanted some water so badly. At about mile 11, I felt like I wanted to burst into tears and just sit down in the middle of the road. But of course I didn't and I kept "running."﻿ 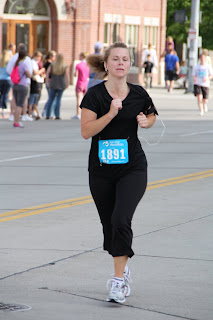 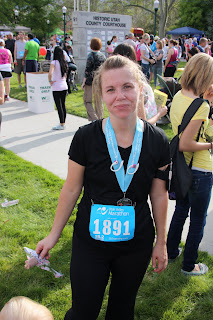 Here I am after eating myself a creamie. 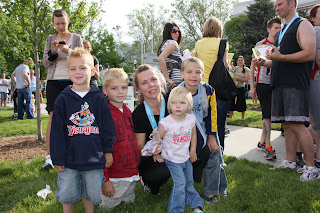 Me with the kiddos.
After it was all done I of course was in pain, so I came home and took some Advil and a nap. Now I am showered and...still in pain. Hopefully I will be fine by Monday morning, because its YW Camp!
Already several people have asked if I would do it again, I'm not sure if I can answer that one just yet. The training is so time consuming and with the kids still being young, it is really hard to find the time to properly train. But maybe next  year I'll have forgotten about the torture I just went through. You never know.﻿
Posted by Jacobson Five at 12:44 PM 5 comments:

Okay, I didn't really forget her, but I did forget to post on the bloggity blog about her birthday. So here are some pictures from the event. 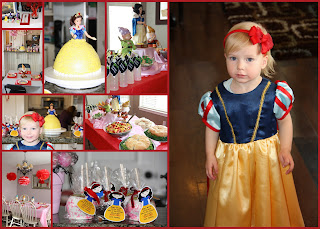 I made her dress a while back for our last trip to Disney so I thought it would be a fun party to do. Several years back my mother-in-law gave me Snow White and the Seven Dwarfs nutcrackers, so they were perfect for decorations. For the decor, I also made tissue paper pom poms and homemade garlands. I made the carmel apples for party favors. We had sandwhiches and salads for lunch. There you have the quick version of the party.
Posted by Jacobson Five at 4:02 PM No comments: 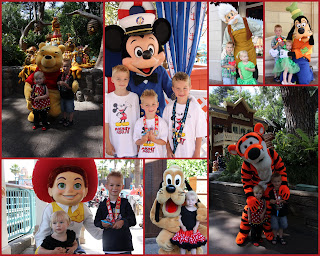 We went to Disneyland again and of course we had a great time. (How could we not, it is the most magical place on earth.) The kids were great. Tanner and Isaac just love riding the thrill rides. Kevin and his dad took them to Knotts Berry Farm one day so they could ride some real roller coasters.
This trip the parks were more crowded then we are used to, but we still managed to do everything we wanted several times. The wait to visit the princesses was 90 minutes long, but we managed to work it in around lunch and we took turns waiting in line while the kids were eating. Otherwise the lines were manageable. While we were there we realized that Sydney has turned into quite the diva and that we have our work cut out for us so that she doesn't turn into a spoiled brat!
We have one more trip planned to Disney in September and then we will be taking a break. Up next on the vacation list...an Alaskan cruise (maybe). Still trying to decide if we can afford it. 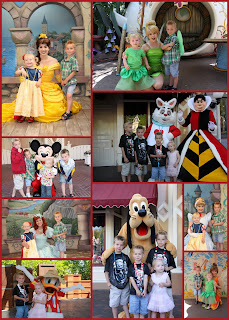 The Dam Valley of Fire 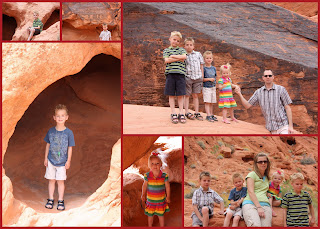 On our way to Disneyland we decided to go the scenic route and swing by Valley of Fire and the Hoover Dam. We had never been to Valley of Fire and some day when it is not windy I would like to go back. Seriously the wind was horrific. We packed a picnic lunch and everytime I took a bite I would crunch on gritty sand. Yuckers! The wind was so bad that we only did one hike, so like I said I would like to go back someday and really see it.
We have been to the Hoover Dam before. Last time we were there, they were building an enormous bridge and I really wanted to see it. Little did I know that you could actually walk across it. I knew we were safe, but that still didn't stop me from being terrified that one of my kids would find a way to fall to their death. We survived to tell the tale. 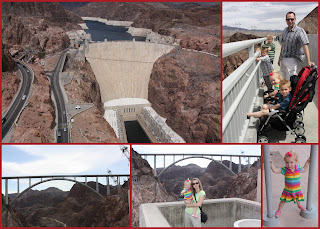 Posted by Jacobson Five at 3:43 PM No comments:

Welcome to My Blog

It's really not that intresting, but it's my life and I like it.

Jacobson Five
My name is Audrey. My husband Kevin and I live in Utah with our 4 kiddos Tanner(8), Isaac (6), Noah (3) and Sydney (1). I do a little catering for fun and occasionally money. I love planning birthday parties for my kids, reading a good book and watching lots and lots of tv.

These are a Few of My Favorite Things: